"There are no original ideas, only original people." --Barbara Grizutti Harrison

I was inspired by a necklace I saw in an Etsy store. It incorporated a tiny metal toy airplane with the paint half worn off. I went, Want... 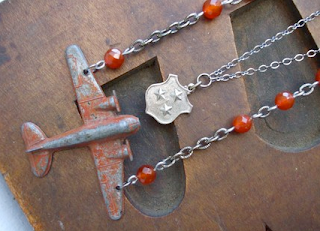 http://www.etsy.com/shop/KariBeth
I marked it as one of my favorites in 2007. It's long gone, but since I started making necklaces, I've kept my eye out for a tiny metal airplane (red) with the paint half worn off.


I finally found one--a little Tootsietoy Spirit of Saint Louis model--and made this necklace. It's very similar to the one I favorited on Etsy three years ago. 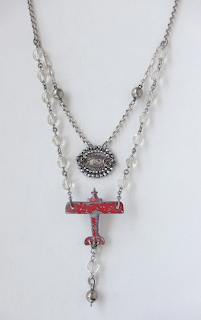 Still, it's different enough to be mine...no? It has a tailwind of crystal and steel.


And I could easily have come to the idea independently. I'm always looking for non-jewelry items to put in my work. Also, turnabout, there are pieces I see in other people's shops that incorporate the ideas and materials I've used or even intend to use, like the sword-belt chain I thought would be fantastic for a man's wallet/belt chain. I bought an old sword belt in an antique store in Texas; a couple of weeks later (before I had even made my piece), I saw that another Etsy seller had made a chain very much like the one I had in mind. Murr.


I mean, there are only so many ways to hang something around your neck... 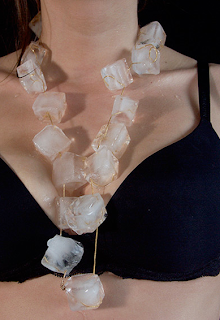 8/19/2010: I came across this great presentation about copyright and creativity.