Posted by maidel at 1:34 PM No comments:

I suppose it'll get harder as time goes by, naming things, finding some trope to associate with the name or piece of jewelry. Now, since I just made a trio of love-token necklaces and am faced with naming them, I thought to use the initials on the tokens as a correlative device and am sitting here surrounded by poetry anthologies, searching the indexes of first lines for three words that match the initials.

This may be a dumb, not to mention extremely time-intensive, idea. Especially for three initials. Two initials are more doable. One is too easy...it becomes more like picking a word at random. So far, for the token SJP/SPJ/PJS/PSJ/JSP/JPS, I've hit upon "primrose, salutations..." The third word should begin with a J, but it's "miry." So, I think to myself, Maybe two will do, and I go to the page the poem is on.

I laugh. Of course, given the way my weekend has been going, it's a Sylvia Plath poem; what else would be there on page 1416, attached to those words? And the next? "miry skull of a half-eaten ram." Um, okay, who would want to wear that around her neck? Well, maybe plenty, but not me.


Sorry; have a unicorn chaser... 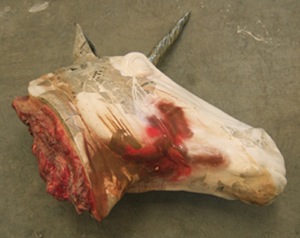 Postscript: Mike was standing in the kitchen, making me a brown-rice quesadilla, because he's sweet like that, and he asked me what I was working on.

"Yes. But I put another picture below it to get that picture out of your head. But it's gory, too."

"Why would you do that? I don't think I'll be able to read it. What's the title?"

"Whew. I thought I was gonna have to tell people my wife started a blog called Maiming Things."